How I purchased C63 AMG by chance

How I purchased C63 AMG by chance

The dreams are far away

As I already told, I don’t earn enough money to be able to afford a car like C63. Of course, as any regular male individual of a certain age, I have attended motor shows and read articles and watched reviews, but I was realistic about the dreams of owning a fast car with sports character (sort of, it’s out of my league).

To be honest, I considered myself, like many others, as the BMW fan. The image of this brand attracts many people with its perfect controllability and the Bavarian aviation charisma. And, of course, among models of this brand a specific place in everyone’s heart is occupied by the line of models with a certain M shield.

One day, in May 2015 my wife and I went to one of the BMW dealers just to see BMW M3/M4 with our own eyes. The manager, having swept his eyes over us (probably realizing that we didn’t look like potential buyers of M3),  has routinely explained that such cars can’t be “caught” in salons because they aren’t ordered for test drives and demonstrations, but only for a particular client, only 2-3 cars a year. Further on, he has told us that one shouldn’t look at the catalogue prices because the actual car prices are at least one million rubles higher. Generally, the basic model is mechanics, not the robot, and the suspension is not that great (to get a normal one, it requires to pay a few hundred thousands rubles more), the exhaust is not great either, and the brakes are basic (one can get the good ones for 500 thousand rubles extra). To make a long story short, he has upset us and has dispelled all our dreams (as I understood later, we just chanced to stumble upon a particularly “professional” manager).

We were down in the dumps when we left the BMW dealer salon, but when we raised our eyes and we saw in 200 meters from us a huge glass shop with the inscription Mercedes and the treasured three letters AMG nearby. We have decided to come in, the friendly manager (Roman, hello!) asked us about the purpose of our visit and suggested to come to his office and just to look through the catalogue, to compile an approximate set of any car. We have looked at options for C63 and E63, the figures were out of this world. Right there we have found out that if you lease a car from the company, then you can receive a 12% discount off the total cost of the car in the required complete set. Moreover, leasing is provided by Mercedes-Benz Financial Services Rus, so the conditions were more than attractive. There was a lot of paper work and coordination, checks of financial stability and a lot of other things.

After all the formalities, the advance payment has been paid and the car was ordered. After several long days of expectation, Roman, the car dealership manager, called us and invited us to the salon. Apparently, at this time they brought Mercedes-AMG C63 S Edition 1 with a tour. 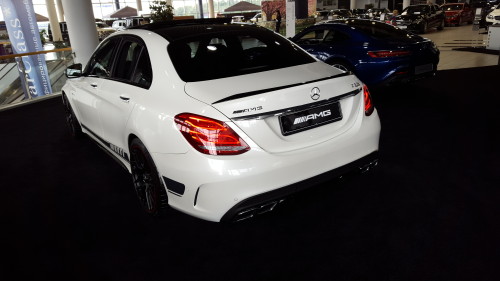 While waiting for my car, this meeting was for like a “music for my ears” – at last I could get into the car and even to listen to that special AMG “aggressive roar“.

Due to the fact that for each country and region the manufacturer (Mercedes) provides quotas (for Moscow it’s something like 10 cars per year), orders are distributed at salons in advance. We ordered in June, the car had to be made at the end of August-September and by early September – late October I expected to receive it. However, Roman, by some miracle, has gotten an extra space out of the redistributed quota and I have got the car made on July 7 with the delivery on July 31. 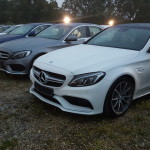 С63 arrived to the warehouse 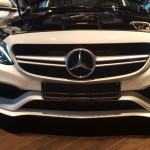 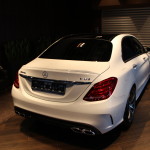 Waiting for the delivery 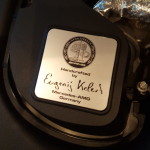 Coincidence? I don’t think so…

PS: Upon purchase of the AMG car, 1 year from the moment of purchase there is an opportunity to complete a one-day Basic course of AMG Racing Academy on your car, which is organized at Moscow Raceway and which, without buying the car, costs 70,000 rubles. I am also going to take this opportunity soon! I will tell you about it in more detail in my Spring posts.